iPad3 specifications and release date are out and we haven’t come across something that was unexpected. I would expect Samsung to come up with something as good, if not something even better soon. An important but an under rated announcement from the Apple Media Event could be the release of iOS 5.1, with Siri in Japanese.

With release of Siri in Japanese, Apple has clearly indicated that it would support Siri globally in times to come. The reason why Siri becomes so significant is because, [highlight color=”yellow”] it is one feature that can’t be completely copied and ported to Android. [/highlight]

First a brief overview of where it may all have started :

The Official biography of Steve Jobs by Walter Isaacson named “Steve Jobs”, provides insight into the unravelling of Jobs’ relationship with Eric Schmidt, ex-CEO of Google and an Apple board member from 2006 to 2009. Schmidt had quit Apple’s board as Google and Apple went head-to-head in smartphones, Apple with its iPhone and Google with its Android OS.

Isaacson writes that Jobs was livid in January 2010 when HTC introduced an Android phone that boasted many of the popular features of the iPhone.

Apple sued, and Jobs told Isaacson in an expletive-laced rant that Google’s actions amounted to “grand theft”. “I will spend my last dying breath if I need to, and I will spend every penny of Apple’s $40 billion in the bank, to right this wrong” Jobs said.

“I’m going to destroy Android, because it’s a stolen product. I’m willing to go thermonuclear war on this.”

“I don’t want your money. If you offer me $5 billion, I won’t want it. I’ve got plenty of money. I want you to stop using our ideas in Android, that’s all I want” Jobs had said. 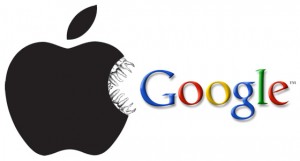 Did Steve Jobs mean Siri when he threatened a thermonuclear war on Google ?

It becomes evident, that Apple was planning not just a lawsuit against Google, but something far more lethal. It appears that Apple had a plan in place in the form of Siri to punish Google for copying popular features of iOS into Android.

People see it, today, as already the best voice recognition application in history. Siri not only accurately recognizes our voices but it has a personality to boost.Â It’s that personality which makes the app addictive because we start to feel over time that we truly have a personal assistant who is our friend.

Siri is basically a contextual, semantic, personalized search engine. Barely within a few weeks after its debut, Siri already seems to be making life hard for Google. A new study shows that people who use Siri don’t really need Google anymore. This is interesting because not only do people use Siri instead of Google, but every time they do Google loses ad revenue.

Siri is the most innovative of the features in Apple products.Â  Siri is a voice controlled virtual personal assistant that relies on artificial intelligence.Â  Apple has done an excellent job at integrating Siri with other apps on the phone.

So, for example, when you ask Siri to find what ‘Submarine Sandwich‘ is, not only would it provide you with the correct definition, but also the way to make submarine sandwich as well as the nearest restaurants where submarine sandwiches are available along with an option to make a call to those restaurants to book a table. Consider another example for instance.

The point is that using Google is a cumbersome process.Â  Siri searched a data base called Yelp completely bypassing Google.

Google has sufficient reasons to be worried

There have been extensive reports from the people in-the-know that Google has been blindsided by Siri. The following are the results of a small study at The Arora Report to validate the hypothesis that users of Apple Siri are reducing Google searches.

This is a small sample and the study is not scientific,Â if validated with larger studies, is a cause of panic for Google. Apple does not generate revenues from Siri.Â  Siri simply helps Apple to sell more phones. The point is that the business model of Apple is to make money by selling phones.

The business model of Google is to make money from advertisements on search results.Â  There is no question that Google is probably hard at work to counter Siri.Â  However, the business model of Google may get in the way.Â  How does Google generate revenues that are given verbally?Â  I cannot imagine Google requiring a person to hear an advertisement before receiving the search results.

Every answer that Siri provides using Wikipedia, Yelp, or Wolfram Alpha is business taken away from Google.

The real problem for Google lies here : Siri would be difficult to copy There are 2 parts to making a successful voice app: The voice recognition technology which has improved a lot but is basically a commodity and the app itself, which is a combination of art and artificial intelligence.Â  It’s that 2nd part that’s so tough to replicate and that’s why Apple bought Siri last year.

It’s true Google has experience in the voice rec space and doing some simple voice apps but they do not have the personality and AI (Artificial Intelligence) of Siri and that will be very difficult to copy â€” especially for a company that doesn’t sit at the intersection of the humanities and technology.

There have been funny instances reported with Siri, but we could definitely expect it to get better.

So to summarize, Siri can cause far more damage to Google than what Facebook can do. The future definitely doesn’t look good for Google unless they can can achieve something as potent with their project code named ‘Majel“.