Eduardo Saverin, the Billion Facebook Co-Founder, has already given up the US Citizenship to save taxes, US$600 Million once the Facebook IPOÂ comes out.

Thought Saverin gave up hisÂ CitizenshipÂ in August of 2011, but this was definitely with the IPO in mind, The Facebook c0-founder, currently enjoys aÂ more tax-friendly residency status of Singapore,Â where the maximum personal income tax rate is 20 percent and capital gains are not taxed. 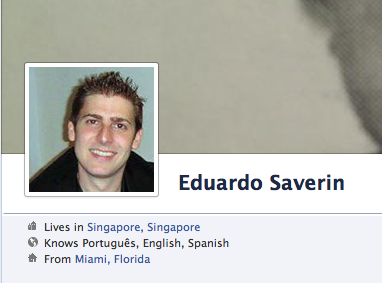 Eduardo Saverin, owns about 5% stake in Facebook which comes up to about US$ 4 Billion and taxes about US$600 Million. “I have worked with him for over a year, and that never came up, Obviously it was a big decision, but he’s making all these investments in Europe, Asia and the U.S. It just seemed a lot simpler.Â Everyone is trying to tie this to the IPO and taxes, It was never about that.” said, Saverin’s Spokeperson, Goodman. But other implementations likeÂ Umbrella company HMRC guidance will offer other ways ofÂ reduced tax liability.

The renunciation, published by the State Department at the end of April and reported first by Bloomberg a few days ago became public just days beforeÂ FacebookÂ shares are expected to be sold to the public. The company is expected to be valued at more than $85 billion.

A record 1780 people gave up their US passports last year compared with 235 in 2008, according to government records. That number may soar again next year when income tax rates for top US earners rise to 39.6 per cent from 35 per cent and rates on capital gains and dividends are also are scheduled to rise.

There is an extremely awesome article written about What Eduardo Saverin owes America, at Pandodaily go check it out.

Is it a Smart Move or just betrayal?