We hope you are enjoying the series of CCNA/NP Articles written on our website, this are ones of the easiest guides available on the Internet and we are encouraging offline reading as well, there is an option below each article to Save and Download it as a PDF file.

Today we are going to speak about on of the most important protocol on the Layer 2 of the OSI Reference Model, The Spanning Tree Protocol, a link managementÂ protocol,Â which is defined in IEEE 802.1D.

Before we go ahead with the understanding of the STP protocol, we need to know the basic functionality of the Layer 2 devices for eg. Switches. 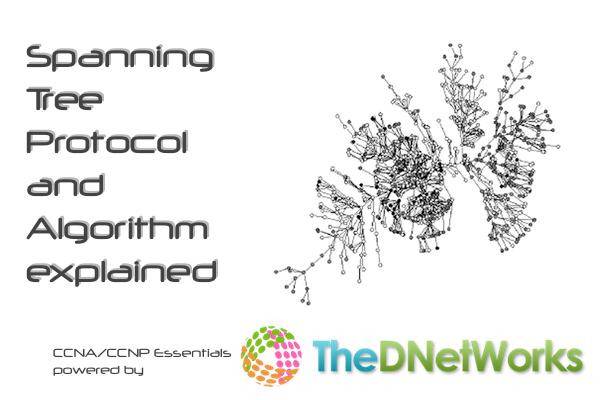 The functions of an Ethernet LAN switch includes

To avoid Broadcast Storms and get the switch to saturate, we use some kind of the mechanism to prevent loops to be formed one of the best used system is the STP or the Spanning tree Protocol

Basically, Spanning Tree finds all the links in the network and shuts down the redundant ones which prevents fromÂ occurrencesÂ of network loop.

STP does this by electing a ROOT BRIDGE, a reference point for all other devices on the network.

By default the bridge with the lowest Bridge ID is chosen asÂ the Root. The Bridge ID is a 64-bit field made up of the priority (the default is 32768) and the MAC address.

IfÂ the default priority has not been changed then Root will be chosen based on the lowest MAC address. The RootÂ Bridge then sends Bridge Protocol Data Units (BPDUs) out all of its designated (forwarding) ports. If a bridgeÂ is not the Root (called a Non-Root Bridge), it will receive regular BPDU on the port that is closest to the Root,Â called the Root Port, all other ports which are not designated ports will be blocked In the above network diagram, The top switch is selected as a root since it has the lowest MAC ID (1111.2222.1111), nowÂ the Root Bridge sends BPDUs using the out ports FA0/1 and FA0/2 (its designated ports). SwitchÂ A receives the BPDU on root port FA0/3 and then sends a BPDU out of port FA0/4. Likewise, Switch B receivesÂ a BPDU on root port FA0/6 and sends a BPDU out on port FA0/5. Both Switch A and Switch B have receivedÂ BPDUs on two different ports. This clearly shows that there is a loop in the network. Since each non-root switch canÂ have only one root port, the loop is identified by the BPDUs on the non-root ports showing a longer distance toÂ the root, indicating that the link must not be used for user frames.

Now, how these distance are measured? The cost of a path is the sum of the costs of the segments on the path. Different technologies have different default costs for network segments. Network administrators can configure the cost of traversing a particular network segment manually as well.

The MAC addressÂ of Switch B’s port FA0/5 is higher than Switch A’s MAC address for port Fa0/4; therefore, Switch B will block port
Fa0/5. That would make FA0/4 on Switch A a Designated (forwarding) Port. There are 5 Stages a port of a Switch in the Spanning Tree Architecture.

We have this has been a very informational post, you can now save this as a PDF for offline reading and sharing purposes. Below is the link to save it as PDF