The budget segment has seen a lot of activity in the past year and it continues to be one of the hottest segments. Many new brands entered this segment and offered very impressive devices. Manufacturers like Lava, Micromax and Karbonn, who used to be the popular choice in this segment, were getting ignored in favour of the new entrants and the mainstream manufacturers getting in this segment. Now Lava has turned aggressive and is planning to take on the rivals with new budget devices on offer at even attractive prices. These new devices would help them boost the volumes again and make their presence felt in the market.

They launched the Lava Iris X1 smartphone last year and now they have added two new devices to the line-up. These new devices are Iris X1 Mini and Iris X1 Grand. The Iris X1 Mini is a low end device running android KitKat. It is powered by a quad core processor and has got a 4 inch IPS LCD display. According to their vice president, they got a very good response for the Lava iris X1 and that is why they are continuing that series and serving people with similar experience with their new devices. This will offer different display sizes to people who like the Lava Iris X1. They have added some smart new features like smart wakeup, gesture controls and intelligent flip cover to make the overall user experience even better with these two new devices. We take a closer look at the smaller device of these two, the Lava Iris X1 Mini. 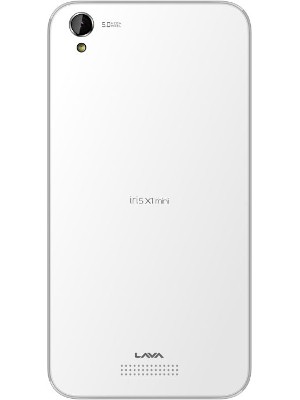 The Lava Iris X1 came with an attractive design and this new device has got the same design built to a different scale. It looks nice but the design has been inspired by old Apple devices (read iPhone 4 and 4S) and it is possible that people will notice the fact and point it out. It has got metal sides like its bigger sibling which give it a nice looks and it feels nice to hold. Unlike the Iris X1, the smaller size helps with the handling and it doesn’t tend to slip out of one’s hand. Just like the bigger device, it is also 9 mm thick which is pretty impressive. The sensors above the display are quite prominent on the white device. There are no on screen keys and it relies on capacitive keys below the display which aren’t visible until you touch them.

The built quality is good and you are even more impressed once you get to know the price of this device. Devices priced even a few thousand bucks above this aren’t as well built. The physical keys are placed just at the right spots to be easily accessible and offer the right amount of feedback. The power key sits on the right spine while the volume control is on the left spine. The camera sits on the top left corner of the back panel. The overall look and feel of this device is quite good and it is hard to match that at this price point. The Lava Iris X1 mini has got the smallest display of the three devices in this series and yet it has got the best display of the three. This is because all three devices have got the same display resolution despite having huge difference in the display sizes. The Iris X1 has got a 4.5 inch display, Iris X1 Grand has got 5 inch display and the Iris X1 Mini has got 4 inch display, all with the same resolution. The resolution is very low at 480 x 800 pixels for the other two devices but for the X1 Mini, it is in the acceptable range. You can’t really ask for more at this price point and this resolution on a 4 inch display looks decent. It gives you a pixel density of around 233 ppi.

They have used an IPS LCD panel for this display which means that the viewing angles are quite impressive. The colours are also well saturated though they aren’t very true to original. The touch is responsive though it gets laggy at times due to the software. There is no protection for the display which is pretty obvious for a device of this price bracket. The display tends to accumulate oil and is bit of a fingerprint magnet. Overall the display is acceptable and good to use for a low end device.

The Lava Iris X1 Mini gets a quad core processor running at a clock speed of 1.2 GHz. the manufacturer of the chipset is unspecified and we weren’t expecting anything like Qualcomm or Intel here anyway. Along with this you get 512 MB of RAM which isn’t sufficient to accompany a quad core processor though it would still do the job for your basic operations. Multitasking is a strict no with this much RAM but apart from minor lags but it is good enough for your everyday uses like calling, messaging, IM and social networking.

The device offers usual set of connectivity options as you would expect from it. It is a dual SIM device with support for 3G networks. Along with that it gets Wi-Fi, Bluetooth, GPS and USB 2.0. It is powered by a 1750 mAh battery which is reasonably big for the device. It has got 4 GB of internal storage and has got a micro SD card slot which supports up to 32 GB. The device runs android KitKat with no word on update to Android Lollipop. The software it runs is pretty much stock which is a really good thing. There are some unwanted apps but it is easy to disable them or get rid of them. It has got a 5 megapixel PureCel Sensor primary camera with LED flash and a VGA front camera. The cameras are no good as you would have expected on a low end device. Overall it is a superb device for the price tag.