The Modern day Robinhoods are here, The Infamous Hacking group Anonymous, known for their large scale hacking activities, including Â OpFacebook, are on a Charitable mission, according to the newsÂ from the Telegraph, Anonymous is making donations to several charitable organizations, usingÂ  the credit card of other people.

Anonymous recently hacked servers belonging to Stratfor, and are reported to donate around $1 million to various charities in the coming days, using the credit card information stolen from the US-based security company. 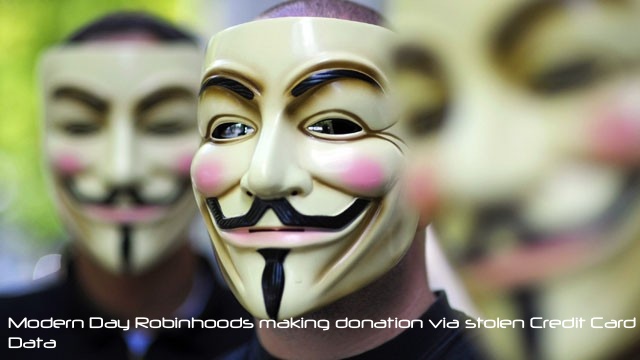 This message came in from their Twitter account, saying they’ve successfullyÂ gained access to Stratfor’s confidential data which included the US Army, Air Force and the Miami Police Department. Later on they tweeted Images of receipts of donation to various charities.

“It was all charities, the Red Cross, CARE, Save the Children. So when the credit card company called my wife she wasn’t sure whether I was just donating. It made me feel terrible. It made my wife feel terrible. We had to close the account,” said Allen Barr whose credit card data was used by the hacking group to make donation worth $700 to several charities.

This isn’t the first time they’ve hacked into a financialÂ institution’sÂ accounts, they have beenÂ attacked confirmed from several big firms including Visa, MasterCard and PayPal.